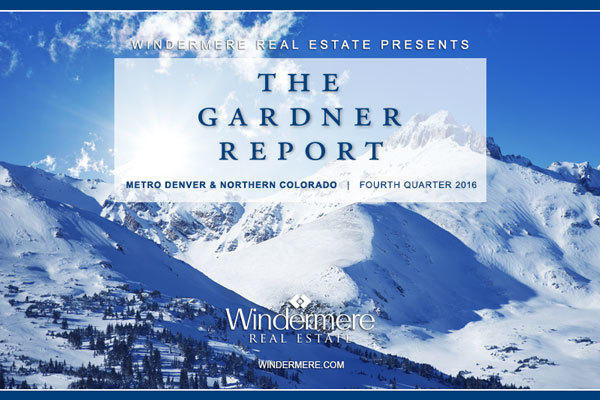 Annual employment growth in Colorado was measured at a respectable 2.2% in November and will likely finish the year having created around 55,000 new jobs. Within the metropolitan market areas included in this report, we are seeing employment growth at or above the state level and I anticipate that this will continue to be the case in 2017.

Unemployment rates continue to drop, and with rates now below three percent, all of Colorado’s metro areas are at full employment. Because of this robust level of growth—in concert with very low unemployment levels—I anticipate that we will see some fairly substantial income growth as companies look to recruit new talent and keep existing employees happy.

For the fourth quarter of 2016, the needle remains firmly in the seller’s territory. It will be interesting to see if the recent increase in mortgage rates has any effect at all on the housing market. I believe that it will; however, I expect that it will likely cause a slowdown in home price growth rather than any collapse in home prices.

Matthew Gardner is the Chief Economist for Windermere Real Estate, specializing in residential market analysis, commercial/industrial market analysis, financial analysis, and land use and regional economics. He is the former Principal of Gardner Economics, and has over 25 years of professional experience both in the U.S. and U.K.

Related Articles
Buyers & Sellers As Home Equity Rises, So Does Your Wealth By KCM Crew via Keeping Current Matters Current Homeownership is still a crucial part of the American dream. For those people who own a home (and those looking to buy one), it’s clear that being a homeowner has considerable benefits both emotionally and financially. In addition to long-term stability, buying a home is one of […]
Market News The Windermere Report
Housing Market Is It a Good Time to Sell My House? 405SHARES 0 146 23 236 Last year, many homeowners thought twice about selling their houses due to the onset of the health crisis. This year, however, homeowners are beginning to regain their confidence when it comes to selling safely. The latest Home Purchase Sentiment Index (HPSI) by Fannie Mae shows that 57% of consumers believe now is a good time to […]